I’ve heard a few people say “Where are the great Mithryn posts?  Why are their fewer timelines in my life?  What new eclectic features of Church History am I missing out on?”

Okay, no; no one is saying that; but I still wanted to explain 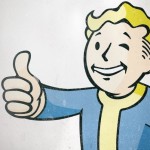 So yes, time is at a premium, but lets talk a bit about Fallout.  The plot of the games (any of them, no spoilers) is that you live in a post-apocalyptic wasteland created by Nuclear War.

My father worked in Missile silos and discussions of post-apocalyptic wastelands were common in my home growing up.  Having the world “End in fire” as Joseph Smith predicted, was often debated as to whether that could be a nuclear war prediction.  Cleon Skousen’s ideals that we should push for nuclear war were tossed about as craziness, but they were present.  Ezra Taft Benson’s talks about communist threats were a common topic.  And let’s not forget the debates on the usefulness (or lack thereof) on Feynman drills.

So all in all, this game is very much the realization of the future predicted in my childhood.  I remember debating in the back of a car, on the way to Scoutcamp (or perhaps home from it) whether any of us would live to see 2020 or if the Millennium would come first.  Think about that! Twelve-year-olds bantering about that none of us would make it much past 40 as a mindset.

So as I wander the waste with my vault-dweller, I can’t help but think about why the church had such a positive outlook on Global Thermonuclear war.  It’s vaults (no seriously, the idea of vault dwellers might come from the LDS faith, which actually has nuclear-bomb proof vaults) in the mountains contain the genealogy and ideology of a people.  The cohesive structure of the group would probably let it rise up fairly quickly in such a scenario.  The scattered nature of the settlements would almost completely ensure the survival of the culture in one form or another.  The hierarchy was set up in such a way that even with all the leadership destroyed, new leadership paths were clear for succession (quite different from Joseph’s day).

The survivors of the LDS faith would be a force to be reckoned with for any other culture.  Indeed, the destruction that would come upon the federal government would almost assuredly be seen as a fulfillment of prophesy and “Just recompense” for what happened to the early saints.

So all that clamoring for Nuclear-hot-death makes some sense, if one is willing to sacrifice a few billion innocent lives in order to see one’s own power structure excel.  Slightly Gaddianton-Robber in thinking, but hey; it’s all about power and control at the base, right?

It does make me think, I’d love to see a Fallout: Deseret, where one is the lone wanderer, who comes into a super power religion in the wilderness.  Unending numbers of secret police and a corrupt power structure forcing women into polygamous relationships… the game practically writes itself!  Oh yeah, maybe because we’ve already seen something like that.

Well, I guess I’ll hold off on that call to Bethesda.

This entry was posted in Current issues. Bookmark the permalink.
Last edited by Mithryn on January 4, 2016 at 4:21 pm