Pictured is the protagonist, Booker DeWitt

Some individuals had made some commentary that the antagonist the Prophet Comstock, in some respects, resembled Brigham Young.  I picked up the game after a number of reviews placed it as 10/10 and several friends commented on how they enjoyed it.

Prophet Comstock has the big beard, but is kind of a mix of Wilford Woodruff’s wide head, Lorenzo Snow’s long beard, and Brigham Young’s full beard 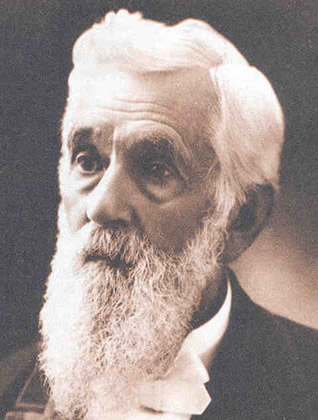 Sure, big beards and the title “Prophet” but what else was similar.

As I played, I looked for specifically historically similar details about the Prophet Comstock and Brigham Young’s history.  At first, I easily dismissed  the idea that someone at 2K games was an exmormon historian, but as the game went on, I had to reject that hypothesis.  What follows is as spoiler free as I can be while naming similarities.

First a word about “Comstock”

I was reading in a mormon manual the other day when it said we could all be our own “Comstocks”.  It’s what prompted me to write this blog post.  I wiki’d the idea of a “Comstock” and found this entry: Anthony Comstock, who actually served in battle, and became a religious reformer

In 1873, Comstock created the New York Society for the Suppression of Vice, an institution dedicated to supervising the morality of the public. Later that year, Comstock successfully influenced the United States Congress to pass the Comstock Law, which made illegal the delivery or transportation of “obscene, lewd, or lascivious” material as well as any methods of, or information pertaining to, birth control and venereal disease.

So the choice of the name “Comstock” is not to be dismissed lightly.  On to the similarities and differences

In the opening scenes of the game, Mr. Dewitt is sent via lighthouse rocket to a steam-punk city in the sky.  He quickly learns that the city is founded on three principles:

Mormon faith also strongly includes devotion to the founding fathers, including the revolutionary war appearing in the Book of Mormon.  This BYU (A church-run school) article praising George Washignton could come straight out of a Columbia press: http://magazine.byu.edu/?act=view&a=1746

I know, I, as Mormon was taught the founding fathers were inspired by God.  The prophet Wilford Woodruff even stated that the founding fathers in spirit visited him, requesting their saving work be done in a Mormon temple (Despite their work already having been done previously by someone a little less famous).

Booker is forced to enter the city by baptism.  This baptism is far more an eastern reform baptism and not terribly similar to anything mormon. However, if one looks at Brigham’s history and early Mormon baptisms, one sees that historically, this was far more similar to what Brigham would have experienced.

As Booker continues around the city, he finds a typical 4th of July atmosphere.  Fireworks, hot dogs, cotton candy all restore health throughout the game.  However, the celebration is on July 7th, when Columbia, the city in the sky, succeeded from the United States.

SIMILARITY:  Both Comstock and Young lead their religions followers away both physically and mentally from the United States.  Both declared succession.

Again, trying not to give spoilers, I will be vague about the game and more specific about similarities.  Booker is declared a false shepard and all of the police converge for much FPS fun.  Skyrails and Zepplin abound that have nothing to do with Brigham Young.

SIMILARITY: Booker is sent to recover “The girl”.  The girl is attempting to escape the civilization and return to the world below (Paris, in specific).  The Girl’s name is “Elizabeth”, but Booker sometimes calls her Ann.

Wife No. 19   is a book written by one of Brigham’s Wives who escaped mormonism.  Her name, “Ann Eliza” stood out to me.  While true the game does not specifically mention polygamy, I think it would have been too obvious if it had.  She divorced young and testified before U.S. Congress in 1875.  Having a girl who leaves the separated city both by the names “Ann” and a form of “Elizabeth” seems more than coincidental.  Ann’s age when she married was 24 when Brigham was 67.

Throughout the game, one is introduced to the philosophy of Prophet Comstock and others.  Included in the prophet’s litany are features such as:

The Negro is lesser and like an animal.  Also taught by Brigham Young

The worker should not complain but should do his work willingly.  Also taught by Brigham Young

Zachary Comstock’s voxphone recording says:”Your right prophet, but if grace is within the grasp of one such as you, How can anyone else not see it within themselves?” This was often a statement about the prophet Joseph Smith, a poor farm boy, and why God called him.  Joseph prided himself on being “just a man” but also a prophet which feel comes through Zachary Comstock’s teachings.

Comstock says that Columbia “another ark, for another time.”  Joseph Smith taught he was like Noah before the Fire.

Comstock refers to Columbia as like Eden.  Joseph/Brigham placed Eden in Jacksonville, Missouri

Comstock: What exactly was the great emancipator, emancipating the negro from? From his daily bread, from the nobility of honest days work, from wealthy patrons who sponsered them from cradle to grave.  Brigham: Slaves in Utah are “perfectly contented and satisfied.”

{Spoiler warning} The leader of the Vox Populi, Daisy Fitzgerald, a black woman, was a slave in Comstock’s house.  Brigham Young kept slaves.  One of the theories of Brigham’s death is that he was poisoned via arsenic in the sugar bowl he personally used, perhaps via a slave/servant in his home.

One cannot help but wonder about the sheer number of troops that come rushing out to attack the false prophet.  However, reading about Brigham Young’s Danites and the account of Johnson’s army, the setting really is set up for unending numbers of troops who want to attack a false prophet.  See Brigham Young’s quote about giving apostates the answer of his Bowie Knife for how false shepards would have been received.

So all of this is kinda fun, but what was it that really convinced me?  Well if the girl had been a plural wife, it just shouts out “Mormon”.  Especially with the name “Elizabeth” and “Ann”.  But that wasn’t what happened.

So among all this new-fangled steampunk tech, one finds a gunsmith at one point in the game.  Joseph Smith (First prophet of mormonism) also had a key gunsmith named “Browning” who built steampunk-esque features for the prophet.  Included were secret passageways and hiding places in the Navoo mansion house, a .50 caliber rifle with a cartridge in the 1840’s (Oh yes, he built a 10 shot .50 caliber), and a refrigerator.  Nothing like the Twins and their floating city, but still interesting that both are key.

And while on your way to the gunsmith, you get a very in-your-face moment with something that is as central to mormonism as multi-wives.

Fink industries’ owner Jeremiah Fink, gives a discourse on how workers should be like the honey bee.  This could have come out of any sunday school manual or priesthood lesson I ever attended.  You see, in the Book of Mormon, the Jaredites (Long story) supposedly take with them “Deseret” or honey bees on steampunk-like submarines, 3700 years before anyone thought of submarines.  This honeybee becomes the symbol of Utah:

One can see it in everything built by Brigham Young.  The temple door handles have honey bee hives on them.  Brigham often spoke about being like the honey bee.

Now a main difference is the class difference in Bioshock Infinite. Fink’s statements are of oppression of the worker, whereas many of the businesses in Utah were started as Co-ops, with the workers sharing in the profits.  But the overall “These cult-like people who separated from the United States identify with the Honey bee and have a bearded prophet” was enough for me to say, someone on the writing team knew something of Mormon history.

Brigham hired a gun named William Hickman, who I thought Booker DeWitt was based on for most the game.

Brigham once told the story of praying if he was different from his Ox.  It is humorous and is similar to Comstock’s conversion story in some respects.  Trying not to spoil here but it involves two path ways.

Brigham’s discourses around 1857 about “Americans” and Babylon sound similar to Comstocks rants against the “Sodom below”.

This entry was posted in Current issues. Bookmark the permalink.
Last edited by Mithryn on March 24, 2015 at 8:05 pm

6 Responses to Prophet Comstock and Brigham Young. A comparison of Bioshock Infinite’s villian