40 talks in 40 days – The Sustaining of Church Officers

The Sustaining of Church Officers

The Vote has been noted – Dieter F. Uchtdorf 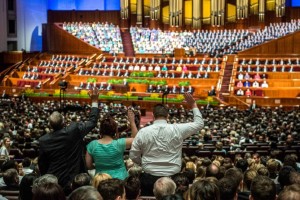 The 2015 Sustaining of Church Officers was one that was significantly different from other years.  That is, three individuals in the conference center, and five total who were worthy ordinary members dared to stand and be counted to be opposed to current leadership.

This prompted other ordinary members to threaten individuals who dare to state their opposition, to passive aggressively oppose those of any opposed, and to generally disapprove of the action because of technicalities.  Perhaps the individuals were too loud, or too visible, or used an irreverent tone

And yet, it was the right place, at the right time.  The leadership actually invited individuals to illustrate their opposition.

Now, members should really think about the guts it takes to stand up when tens of thousands around you would get angry enough to consider violence for one’s stance.  LDS individuals who do this anywhere else against any other group, whether it be teenagers refusing to perform as they agreed to (This was a popular story in my seminary class), or standing up to atheist professors this is an acceptable behavior that receives praise.

Which makes one think that the problem here wasn’t the action itself, but that the LDS membership cannot tolerate anyone standing up to their beliefs or leaders.

I’m going to quote one such leader and belief:

“Shall I tell you the law of God in regard to the African race? If the white man who belongs to the chosen seed mixes his blood with the seed of Cain, the penalty, under the law of God, is death on the spot. This will always be so. The nations of the earth have transgressed every law that God has given, they have changed the ordinances and broken every covenant made with the fathers, and they are like a hungry man that dreameth that he eateth, and he awaketh and behold he is empty.”

Now one can say that “He was a product of his time” or “He was just speaking as a man”, but yet for that to be made known DURING his time, it would take conscientious objectors like those at Any Opposed who stood up in Conference.

Indeed, the LDS system has a format for correcting “Doctrines of men” being “Mingled with scripture” but that only functions if someone opposes.

So why were so many members angry or afraid of 3 standing against tens of thousands?  I think any believing member should ask themselves if their doctrine and leaders are so fragile that if a child points out that the emperor has no clothes they should be careful of emotional reactions over-coming logic.

Because beating down those who dare to question guarantees that incorrect beliefs that are a product of our time or “Speaking as a man” will occur and go uncorrected.

This entry was posted in 40 talks in 40 days for General Conference. Bookmark the permalink.
Last edited by Mithryn on September 6, 2015 at 5:26 pm