Once upon a time, which is how all the best stories of General Authorities start, President Kimball, the rest of the twelve, and several seventies headed to Denmark for a regional conference. Rex D. Pinegar was there and related it in the conference report.

They, for some reason, decided to go to the Vor Frue Kirke (Church of Our Lady).  It houses some sculptures by artist Bertel Thorvaldsen. 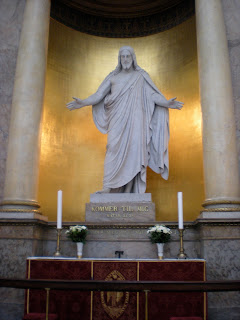 Maybe it has something to do with the fact that this sculpture was done by him, and the Visitor Center in Salt Lake City copied it without permission.

Standing in order along the two sides of the cathedral are the lifelike statues of the apostles, with Paul replacing the betrayer Judas Iscariot. As we looked at those beautiful works of art we noted that Peter was sculptured with large keys in his hands; John is holding scriptures. Others of the Twelve are shown with identifying symbols indicating, for example, the manner in which they earned a living or how they were martyred. President Kimball thoughtfully studied each statue. 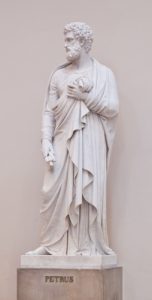 This is the famous Peter statue going to be referred to throughout.

As we were ready to leave the cathedral, the Danish caretaker, a man about sixty years of age, was standing near the door awaiting our departure. President Kimball shook his hand, thanked him for his kindness in letting us visit the cathedral.

My dear friend, the man who created these statues was surely inspired of the Lord. The beauty and majesty of the Christus are wonderful. While Thorvaldsen was doing his work here, in 1821 to 1844 Joseph Smith was doing his work in America. Thorvaldsen didn’t have the gospel as did Joseph Smith, but he had the Spirit. He must have been inspired to create these statues of Christ and the apostles. He was trying to bring them to life.

Okay, so, I get that this is a missionary experience, but he’s witnessing to a groundskeeper.  The Janitor/Gardner guy.  Remember that for the next bit:

Gathering President Tanner, Elder Monson, and Elder Packer closer to him, the president continued, “We are living apostles of the Lord Jesus Christ. There are Twelve Apostles and three others who are the presidency of the Church. We hold the real keys, as Peter did, and we use them every day. They are in use constantly.”

The Groundskeeper has been polite. He showed this wacky little religion from America around in his church to the priceless statues, and now they’re making a claim, that to him, probably sounded like, “and space aliens made me Jesus.”

He then bears his testimony. Of course, Packer was there and adds some color on how the prophet of God suddenly shouted in front of the church’s caretaker in 1995:

President Kimball, this gentle prophet, turned to President Johan H. Benthin, of the Copenhagen Stake, and in a commanding voice said, “I want you to tell every prelate in Denmark that they do not hold the keys! I HOLD THE KEYS!”

All Caps. Of course, shocking the church caretaker and putting weight on the Stake President of Denmark while beating his chest that he was better than some statues was a better story than Pinegar’s version, and so it was repeated in 1997. Then it was added to lesson manuals, published in books (page 128), teacher’s manuals, and is still in current lesson manuals.

For whatever reason, Boyd K. Packer retold this story in 2008, but a much gentler version, almost more similar to what Rex Pinegar originally said:

President Kimball pointed to those keys and explained what they symbolized. Then, in an act I shall never forget, he turned to President Benthin and with unaccustomed firmness pointed his finger at him and said, “I want you to tell everyone in Denmark that I hold the keys! We hold the real keys, and we use them every day.”

I knew “Bruder” Benthin while I lived in Germany and he rehearsed this story to me as well. Neither the prelates of Denmark nor the lay membership of the church hold the keys and the rights to declare doctrine, or to alter the interpretation of scripture in any way. And you can always expect me to remind people of this who try to claim otherwise.

So why the renewed, softer version of the story? I know that the Rome missionaries have been told this story with the harsher words, and that they are copying the Vor Frue Kirke’s “Christus” and statues of the apostles for the visitor center of the Rome temple that is being built.

…the visitor’s center is shown with a copy of Thorvaldsen’s “Christus” statue. We have been told that not only will there be a copy of this statue, but of the original Twelve that he did while living in Rome in the 1800s.

So, we love the statues, love the ideas, and Boyd K. loves the idea of pounding the “truth” of us having the keys into everyone in Denmark, starting with 60-year-olds who watch over churches.

What does this look like from an outsider’s perspective?

Imagine if WarrenJeffs were to walk up to the SaltLakeTempleVisitorCenter. Imagine that he listened carefully and looked at all the paintings and the Christus there. Then, as he was leaving he said, “We are the living apostles, we have the KEYS!” to the missionaries working there. How crazy would he sound? That’s what Kimball sounded like to an outsider.

It reminds me of a line from They Might be Giants’ “Lost my lucky ball and chain”-  “I can shake my tiny fist, and swear I wasn’t wrong, but what’s the use in arguing, when you’re all alone?”

Why do we repeat this story? Because we want to convince ourselves that we’re right.  That was why Kimball said it to the caretaker and to those around him. The caretaker didn’t care. It was to sell the message to the already converted. Why didn’t kimball approach the dioceses of the Catholic church in Denmark that day with his message?  Because it wasn’t to convince anyone on the outside, but to fire up the hearts of the convinced that they are right, powerful and needed.

Beat on that chest, BoydK.  Beat on it good. It’s all you’ve got.

This entry was posted in GA Bullsh*t. Bookmark the permalink.
Last edited by Mithryn on February 13, 2017 at 4:44 pm