Lesson 3: The Role of the Learner

Lesson 3: The Role of the Learner

This… this is an odd lesson.  It is the moral equivalent of a Science teacher saying to science students that they will only feel gravity if they ponder about gravity.  Like they would need to meditate on the Scientific Method for 5 minutes before class starts or else science wouldn’t work any more.  Or that they need to give oblations to the Gods of History to comprehend the Louisiana Purchase

A young woman is inspired and edified as she attends seminary. She feels the influence of the Holy Ghost there and is grateful for the things she learns. Another young woman is in the same seminary class. However, she is often bored and feels that she doesn’t get much out of the class.

Sooo… it’s the person’s fault if they are bored?

Question: What are some possible reasons why these two young women have such different experiences while attending the same seminary class? 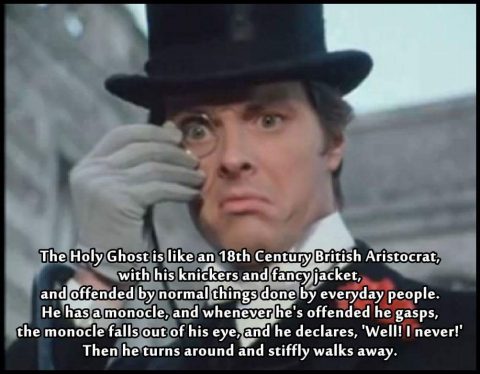 See you’ve offended the British Aristocrat in the sky so of course nothing interesting will happen in the class today.

Acceptable answers to the question include:

Ah, yes the interested woman is more spiritual or more active.  That’s gotta be it.

Explain that three individuals have essential roles in gospel learning in a setting like seminary: the Holy Ghost, the teacher, and the student

Let’s view this like someone who has never heard of Mormonism.  If I invited you to a room where an incantation to summon a spirit that always watches whatever we do and invite that spirit to put information into your head that you would otherwise miss; how would that make you feel?  What if I told you this spirit was actually an alien entity send out by a god who lives on Kolob (either the name of a planet or a system, it’s unclear). Beyond that, this same Alien divine presence must be in all the classrooms holding seminary at once.

This is just plain odd, and yet we do it without thinking.  Not only do we invite the spirit in the opening prayer, but according to this lesson, for any learning to take place the Holy Ghost is essential as a class participant.

I mean this is essential to Christianity and very much in line with John’s claims here.  The Holy Ghost is there to teach and remind people of what Jesus said.  It’s still a truly bizarre concept.

How can we know when the Holy Ghost is teaching us truth?

Once we’ve established a lift in success metrics we can source a study instead of scripture that the Holy Ghost is real and the extraordinary claim that inter-dimensional invisible persons are present in our classrooms helping us learn can be entertained.  Of course we should really get it peer-reviewed before claiming knowledge on the topic.  Not to brag about other churches but some have actually done this and come to the conclusion that external sources were responsible even for the miracles mentioned in the New Testament.

Yeah, that’s how one knows things instead of claiming knowledge.

“A teacher can explain, demonstrate, persuade, and testify, and do so with great spiritual power and effectiveness. Ultimately, however, the content of a message and the witness of the Holy Ghost penetrate into the heart only if a receiver allows them to enter. Learning by faith opens the pathway into the heart” (“Seek Learning by Faith,” Ensign, Sept. 2007, 61)

Mr. Bednar says we can know if a person has the Holy Spirit because they will learn by faith.  But a person can only learn if they have the Holy Spirit.  Let’s apply this logic to any other topic.  How about Star Trek Physics?

This section by Bednar is what is known as the “no True Scotsman Fallacy” but instead of applying it to distant Scottsmen we are, with divine guilt attached, attaching it to the students in front of the teachers.  In addition; with a very Blue-eyes/Brown-eyes set up encouraging the teacher to treat students who claim to “get it” differently from those struggling.  This isn’t just mildly bad, this is actively harmful to childrens’ ability to learn and feel loved in an environment.

We express our faith through action.

And here we find that this Fallacy combined with favoritism to those who claim to get it is weaponized into peer pressure.  If you don’t do what the teacher says, you’re clearly one of the “brown eyes” aren’t you? (Side note, I actually had a seminary teacher take a picture of Christ through the class and point out he had Blue Eyes to everyone in the class, no kidding).  If you don’t comply, the teacher has every reason in the world to dismiss you.

Ask tough questions… well that got Satan thrown out in the last lesson, didn’t it.

This is Manipulation, and anyone having a teaching degree should be ashamed of agreeing for anyone to go along with this, but then Seminary teachers don’t have to have teaching degrees, do they.  Think about that.

Note: This may be an appropriate time to read Doctrine and Covenants 88:122 and discuss the importance of order and respect in the class.

Ain’t it just?  They directly tie these principles to control

They then give the example of Peter leaving the net to follow Christ without thought.  Blind obedience is immediately presented as the correct course of action.

This is cult-level indoctrination and every parent should be wary of this, even believing members.  A seminary teacher could easily use lessons like this to sexually manipulate class members because yes that has happened.  Mind control techniques which are beneficial to the organization are the same techniques used to manipulate kids to do other things.

Truth and thought should always be promoted over blind faith.  Period.

This entry was posted in Seminary Manuals. Bookmark the permalink.
Last edited by Mithryn on August 24, 2016 at 12:52 pm

2 Responses to Lesson 3: The Role of the Learner