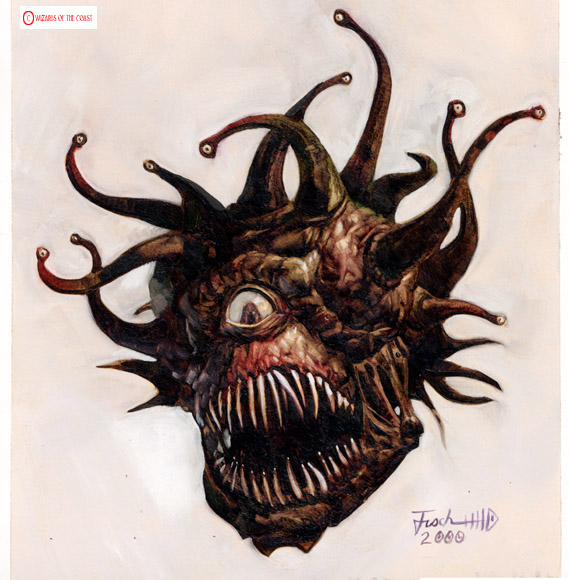 The beholder is a fictional monster in the Dungeons & Dragons fantasy role-playing game. Its appearance is that of a floating orb of flesh with a large mouth, single central eye, and lots of smaller eyestalks on top with deadly magical powers.

In a recently  published article, FAIRLDS.org (renamed FAIRMormon and still not sued for it despite it being far more often taken as church sponsored when it isn’t than a dating site ever would be) contributor Kevin Christensen attacks Jeremy Runnells, the author of the CES Letter.

He asks a pertinent question and then uses his own thoughts mingled with Christ’s parables to answer it: Runnells is to blame.  He wasn’t good ground.  Or he didn’t look at it right.

The question he asks: In his Letter to a CES Director, Jeremy Runnells explains how a year of obsessive investigation brought about the loss of his testimony. In an LDS FAQ, LDS blogger Jeff Lindsay deals with all of the same questions… has not only an intact testimony, but boundless enthusiasm. What makes the difference?

It is interesting how he decides to immediately invoke “God is on my side” logic, rather than actually review the issues and how the bloggers approach them.  The parable of sewer clearly says that Jeff Lindsay is the good ground, whereas a Minister of a Christian faith might see the reverse; that the good word finally hit Jeremy Runnells, whereas Kevin and Jeff are the thorns ensnaring people.

How can we get past our own personal biases and know what really made the difference?

1. Jeff Lindsay started with the conclusion.  Jeremy Runnells attempted to prove his hypothesis, that the church HAD to be true, false.  Jeff reviews all information and applies the test of “Does this match my conclusion that I have already determined”.  Why this matters:  This is explained far better by Staticticians than myself. Basicially all of science and how we “Know things” is around trying to prove what we believe false, because otherwise our bias  will cause us to only review the things that confirm our beliefs.  It’s not that Jeff and Kevin are evil, bad, or try to mislead people, they just fall into their own biases.

2. How do you know they fall into confirmation bias?  Well I’ve actually spoken with Jeff Lindsay and read his blog.  His post about DNA and the Lamanites requires that the lamanite genetics are not wide spread.  In other words it must take place in a small location. His post about Quetzalcoatl requires the Lamanites/Nephites to be in a particular location and to be wide spread.  Yet he doesn’t even hold his own theories against each other to make sure they don’t contradict.  In other words, his research shows a history of not trying to falsify his suppositions.  When I challenged him for example to review all of the times God said in revelation to Joseph Smith that the Lamanites were in Missouri, and asked him how he reconciled his beliefs with contrary evidence he replied back with Silence

Now maybe he was very busy, but the conversation went very well until he was asked what he did with conflicting data and then poof… no more conversation.

The idea that they accuse Jeremy of this very thing, that it was the context and how he read the scriptures or history that caused him to come to his conclusions is almost humorous.  Pot, this is the kettle and it might be black.

3. The FAIRlds/FAIRmormon aren’t looking for truth, they are looking for faithful answers.  Jeremy wanted to know what was true, wherever it took him.  FAIR members know they only get published if they come to the right conclusion.  That’s not science, that’s peer-driven confirmation bias published to make people feel better.

If Mr. Christensen wants to do an unbiased evaluation of the two, I suggest he leave his scriptures at home, and talk about methods of approach, such as how Jeremy sought out authority to answer his questions, and when Authority did not reply he asked FAIR contributors who contradicted each other and why Jeremy took the actions he did as compared to Jeff.  Perhaps we could delve into Jeff’s background with the church, and his ties to how he was published.  Maybe we could just discuss the scientific method and see who used it better.  Regardless, simply lobbing “Parables justify us, and not you” at someone who seriously wanted answers… not cool, nor productive.

Below this line comes sarcasm

The comparing of Mr. Runnells to Chicken Little is a straw man argument.  Jeremy picks out the Isaiah being exactly in the Book of Mormon as it is in the bible because it is evidence of plagiarism.  It is not a acorn falling from the sky, it is something that any high school English teacher, if they noticed, would flunk a student for doing.  It is a red flag (and there are many others) that he copied the work from somewhere else.

What does Nibley and the others reply… that he had no bible to copy from.  Well, I’ve seen Joseph’s Uncle’s Bible myself which is the type that Isaiah was lifted from (Utah Daughters of Pioneer’s Museum in Utah) and Joseph himself explains he read from the bible (remember that whole Jacob 1:5 thing?) so he clearly had access to bibles.

If we’re going to compare allegories with Chicken Little, then I’d suggest the title of his article is very apt.  One eye, large mouth monster that uses tiny eye-stalks to spread its chaos… describes FAIR pretty well to me.

This entry was posted in Current issues. Bookmark the permalink.
Last edited by Mithryn on June 27, 2014 at 3:38 pm