I pray that we will resist the temptation to draw attention to ourselves and, instead, strive for a far greater honor: to become humble, genuine disciples of Jesus Christ

Says a man in a suit at a podium being broadcast worldwide.  Think about that for a minute.

In the late 18th century, Catherine the Great of Russia announced she would tour the southern part of her empire, accompanied by several foreign ambassadors…There was only one problem: it was all for show. It is said that Potemkin had assembled pasteboard facades of shops and homes. He had even positioned busy-looking peasants to create the impression of a prosperous economy

What a horrible thing to do.  If a company does this for investors it is fraud in today’s world.

the term “Potemkin village” has entered the world’s vocabulary. It now refers to any attempt to make others believe we are better than we really are.

So, for example if you only have 5 million active members, but continue to doggedly insist there are 14 million members… 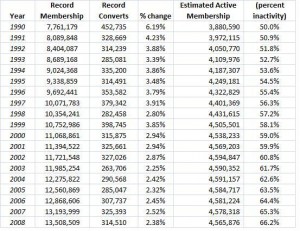 Oh oh, I know if you insist that your organization does charity but in reality spends more on a mall than all the years of its existance that would be an example of a “Potemkin village” right?

Or if you send out 30,000 more missionaries but have the same conversion rate, but still claim it a success that might be a bit similar to a “Potemkin village”, huh?

It is part of human nature to want to look our best. It is why many of us work so hard on the exterior of our homes and why our young Aaronic Priesthood brethren make sure every hair is in place, just in case they run into that special someone.

Ha ha ha.  Oh, yeah.  I’m sure there is no one who helps the LDS leadership look well for their televised events.  Vanity, right?  But as he says, vanity; although a sin in some religions, isn’t the problem here.

There is nothing wrong with shining our shoes, smelling our best, or even hiding the dirty dishes before the home teachers arrive. However, when taken to extremes, this desire to impress can shift from useful to deceitful.

So when, exactly does it shift from Useful to Deceitful?

In our day, the Lord has similarly strong words for priesthood holders who try to “cover [their] sins, or to gratify [their] pride, [or their] vain ambition.” When they do this, He said, “the heavens withdraw themselves; the Spirit of the Lord is grieved; and when it is withdrawn, Amen to the priesthood or the authority of that man.”3

So anytime the church tries to cover their sins, or gratify their pride or vain ambition, the priesthood is removed from the organization.  Well, it’s a good thing we don’t have a long sordid history of trying to hide facts or skeletons in the closet.  And we would never want to have leaders who say, lie on international television, or state that historians are too willing to tell the truth but should only tell useful truths.  That might mean the church was in apostasy and devoid of priesthood!

as the Revelator said of the Ephesians—we have “left [our] first love”?4

And there you have it, if you take actual, verifiable facts and compare them to Deiter’s talk, the conclusion is that the organization has left Christ as a whole.  His words, compared to what they imply when one takes the organization and holds it accountable, equate vain ambition and trying to look good before the world, with abandoning Christ.

He’s either wrong, or his position as Apostle is.  Which do you think it is?

This entry was posted in 40 talks in 40 days for General Conference. Bookmark the permalink.
Last edited by Mithryn on September 30, 2015 at 11:39 pm