Imagine that you’re driving down a highway…

And you recognize the school bus in front of you as coming from your home town.  Not just that, but as you pull along side it, you realize that it is, in fact, from your old school. 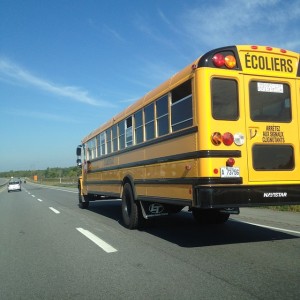 A wash of nostalgia comes over you and you think about old times at that school.  Then you see something grey drop away from the school bus windows.

“Punk kids are littering,” you think, feeling a touch of guilt that something familiar to you could be seen in a negative light.

Then you see another grey thing drop out and realize, to your horror that it is a cat.  You’re both going slow enough that the cat survives, although dazed.  What are they doing?

Then another one drops and it is a kitten.  Astounded you push your car up to the front of the bus to try and see if the bus driver is aware.  You ponder calling the police over animal cruelty.  What can anyone do? 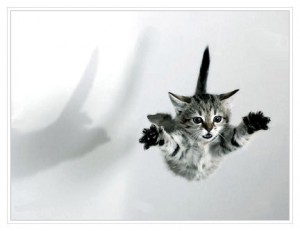 When the school bus comes to a stop, you pull your car over and rush in to see that not only do they have kittens, but that the teachers sitting at the front of the bus are encouraging the activity.  Ol’ Mr. Todd, who taught you English is standing up and you respect him, so you demand an answer.  He explains to you:

Angry, you tell him you’ll post what is going on on facebook.  you’ll tell the whole neighborhood how wrong this is.  He calmly tells you that you moved from the neighborhood, and so what happens to the kittens here shouldn’t be any concern of yours.  Further, the kids all shout you down with testimony that the school leaders are right, and that “Almost none of the kittens have died”.

Of course, we’re not talking about Kittens, but the rational used by the LDS church to toss Homosexual members who become married legally and lawfully out of the church, as well as restricting their children from baptism.

The argument that it is to protect those children, and that no one is harmed is quite shallow.  The church published that no children would be left out of activities, but when Johnny is left out of the temple trip, and all of his other friends go, he is going to be easily singled-out as having a gay dad; unless the church suddenly allows non-baptized kids to go on temple trips?

And what happens when kids are singled out?  I turn to J.K Rowling.  In her Harry Potter series we see kids distinguished by their parents by a term “Filthy Mugblood”.  Malfoy spits this slur at Hermione, regardless of her wit, charm, and capability, singling out  individuals has long been the source of painful experience for youth.  And the church codified it, Lucious Malfoy-style.

Now you may think my Kitten example was hyperbole, but when one realizes that Utah is twelfth in the nation for teen suicide, and that 2 teens a day committ suicide with a heavy portion of that being to LGBT issues I hope you can see that, in fact, the Kitten-comparison was mild.

This is not to “protect children” or it might have some grandfather clause.  Another excuse given was that they church didn’t want to see children on the “front-line of spiritual warfare”; however, I would say that any church who demands “Every member a missionary” and teaches children from age 3 up to invite their friends to hear about the religion at least once a year has already put the children there.

In Moses, in the PoGP, there is a discussion of seeing things with a spiritual vs a natural eye.  I can see with my natural eyes that this thing is bad.  It is harmful, and no amout of Mansplaining from leadership will justify throwing kittens off a bus.  As Moses supposedly said to Satan in Moses 1:18 “I can judge between thee and him”.

I am hopeful that members of the church can discern that this thing is bad with their natural eyes, rather than defend kitten-droppers.

This entry was posted in Current issues. Bookmark the permalink.
Last edited by Mithryn on November 8, 2015 at 5:35 pm