We believe in Joseph Smith the same way many members of the church do. We believe he was a real person, led to do some amazing things. We would like to share some of what we know about him.

We believe that we can know the truth, or at least understand, about historical events like the First Vision. We believe that one must “study it out in one’s mind” (D&C 9:8[1]) before one prays and asks God for a confirmation.

We have some journals here that record the events surrounding the First Vision. We would like you to read one. Can you please read the following:

By aid of the Seer Stone, sentences would appear and were read by the Prophet and written by Martin, and when finished he would say ‘written;’ and if correctly written, the sentence would disappear and another appear in its place; but if not written correctly it remained until corrected, so that the translation was just as it was engraven on the plates, precisely in the language then used (CHC 1:29).

“The manner in which he pretended to read and interpret, was the same as when he looked for the money-diggers, with a stone in his hat, and his hat over his face, while the Book of Plates were at the same time hid in the woods” –Isaac Hale, father of Emma Hale Smith, in an 1834 affidavit.

“When Joseph was translating the Book of Mormon [I] had occasion more than once to go into his immediate presence, and saw him engaged at his work of translation. The mode of procedure consisted in Joseph’s placing the Seer Stone in the crown of a hat, then putting his face into the hat, so as to entirely cover his face, resting his elbows upon his knees, and then dictating word after word, while the scribes – Emma, John Whitmer, O. Cowdery, or some other wrote it down” –Michael Moore, Emma Smith’s brother-in-law.

“Now the way he translated was he put the urim and thummim into his hat and darkened his eyes then he would take a sentence and it would appear in bright roman letters then he would tell the writer and he would write it then that would go away the next sentence would come and so on. But if it was not spelt rite it would not go away till it was rite, so we see it was marvelous. Thus was the hol [whole] translated” –Joseph Knight, Sr. (spelling preserved from original). 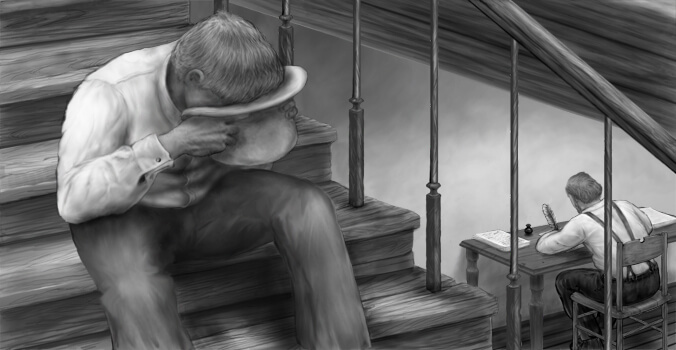 We understand that knowing that Joseph used seer stones to translate can be confusing, but we want you to know that it is true. FAIRmormon.org, a mormon site dedicated to correct mormon history and doctrine says:

“The Church’s Historical Record records Joseph’s use of the seer stone to translate all of our current Book of Mormon text” [3].

Will you study this pamphlet/website[4] and pray about whether the things it says are true?

(Note: if the investigator seems skeptical, discussing how hard it would be to fake all the accounts listed, or pointing them to LDS works that say the same might help resolve any concerns)

An account that almost all members of the church are familiar with is Joseph Smith’s First Vision. We appreciate Joseph for having a significant spiritual experience when he was a boy. We would like to share more information about this experience.

Some members have very firm testimonies of the First Vision and it can be difficult for them to learn that the version they know was not only unheard of by the early church leaders, but that early church leaders would have disputed that God had a body or that Jesus and God were separate personages.

… when I considered all these things and that (that) being seeketh such to worship him as worship him in spirit and in truth therefore I cried unto the Lord for mercy for there was none else to whom I could go and to obtain mercy and the Lord heard my cry in the wilderness and while in (the) attitude of calling upon the Lord (in the 16th year of my age) a piller of fire light above the brightness of the sun at noon day come down from above and rested upon me and I was filled with the spirit of god and the (Lord) opened the heavens upon me and I saw the Lord and he spake unto me saying Joseph (my son) thy sins are forgiven thee. go thy (way) walk in my statutes and keep my commandments behold I am the Lord of glory I was crucifyed for the world that all those who believe on my name may have Eternal life (behold) the world lieth in sin and at this time and none doeth good no not one they have turned asside from the gospel and keep not (my) commandments they draw near to me with their lips while their hearts are far from me and mine anger is kindling against the inhabitants of the earth to visit them acording to th[e]ir ungodliness and to bring to pass that which (hath) been spoken by the mouth of the prophets and Ap[o]stles behold and lo I come quickly…”

Allow your investigator time to notice some differences. Some key points to bring up if they are not sure: There is only one visitor that is called “God,” but clearly states He was crucified. Joseph clearly states he was 16, which means the First Vision would have happened in 1822, two years after the official version. Joseph knows that there is no true church on the Earth before he prays in this version.

More details, including links to all four versions of the First Vision that Joseph Smith wrote, are available here.

Another thing we wish to share with you about Joseph Smith was that he often used other people’s words. Whether or not Joseph asked for these words to be attributed to him is unclear in some cases. For example, Joseph Smith asked William W. Phelps if he could use an entry from his diary as a revelation on the land of Missouri. The original entry can be found in this book[1].

In addition, the Articles of Faith, often attributed to Joseph Smith in the Wentworth Letter, appear in a publication by Orson Pratt in England one year earlier.

(Note: the original fourteen Articles of Faith are available here)

Many ideas contained in the Word of Wisdom appeared in pamphlets and brochures in and around Kirtland, Ohio. These were published by the Temperance Society, which many of the Kirtland members belonged to.

Even the idea of three degrees of heaven was not a new concept. Doctrine and Covenants 76 closely resembles the ideas of a man named Emanuel Swedenborg. He published many works and was well read by Sidney Rigdon as well as Joseph Smith.

We’ve given you many things to think about and ponder. A man could spend an entire lifetime studying the details we’ve shared. We urge you to consider the information we’ve presented carefully and to think over the implications.

We’d now like to share with you some details about the Book of Mormon that are of similar interest. We ask that you open your mind to consider carefully and prayerfully what we have presented. We know what we are presenting is true, and we would like to share that truth with you.

The Book of Mormon

The Book of Mormon also contains many things that come from other works. Some passages are obvious, such as the Isaiah chapters in Nephi. We would like to share with you a few items that are not as obvious.

In Jacob, chapter 5, Jacob quotes Zenos about a parable of an olive tree. The parable appears to be drawn from two biblical sources – the Song of the Vineyard in Isaiah 5, and Paul’s discussion of the relation of the Gentiles to the Jews in Romans 11. The chapter starts out very similar to Romans 11, comparing gentiles and church members to olive fruit. In verse 41, however, the topic switches to a vineyard without explanation. Significantly, this change occurs after a quote from Isaiah. We believe that a prophet like Zenos would know the difference between an olive orchard and a grape vineyard.

Historical inaccuracies in the Book of Mormon

The Book of Mormon includes many details that should help archaeologists and anthropologists find the lands that comprised the Book of Mormon. Steel swords[1], chariots and horses[2], silk[3], and linen[4] all did not exist in the New World before Columbus.

Apologists have tried to Answer these Questions

Apologists often call people who question the faith, “anti-mormon.” They attack the credibility of scholars and innocent questioners alike. Many times, they will provide a quote out of context, or only part of the information. Sometimes, they dodge the actual question or provide discredited evidence to solve the question.

Here is an example of such a case:

In 1935 a horse skull was found in a Wisconsin mound. In 1936 a college student found out about the skull. He confessed that when he was in his teens he and a friend had buried that skull in the mound. Like teens today, they laughed about what someone would think if they found it two hundred years later, but, as an adult, he wanted to make things right. In 1962, the same teenager became a professor and published an apology for his hoax[5].

As late as 2001, BYU professors tried to show evidence for the book of Mormon using this same skull as evidence[6].

A video claiming this skull as evidence is still available on the Maxwell Institute’s video channel, published in 2005[7]:

The Book of Mormon and Horses

There are many more truths about Joseph Smith, the First Vision, and other points of the church we’d like to discuss. When can we come back and talk about these very important matters?

Thank you for your time.

This entry was posted in 6 nonstandard discussions. Bookmark the permalink.
Last edited by EmmaHS on January 24, 2013 at 12:02 am