As covenant-keeping women and men, we need to lift each other and help each other become the people the Lord would have us become.

Let’s talk about “Covenant Keeping”.  What exactly is a covenant?

Synonym with a contract.  And thus would be regulated by Contract Law.  Can an 8-year-old sign a cell phone contract?

General: A child acquires legal capacity to enter into a legal contract at 18 (unless another age is specifically set out in a particular law)

The question becomes why?  Why can’t a kid sign up for their own cell phone, or marriage, or form other binding agreements when they still are of an age to believe in Santa or struggle with times tables?

Before we answer that, let’s review what happens to a contract if you are forced to sign it without being told the terms and conditions according to the BBB:

You have the right to cancel if you can prove the contract is illegal or was induced by misrepresentation or fraud.

Now, please note that I’m not a contract lawyer, but I think the LDS church is not, in fact, a covenant-making people.  The contracts are signed by minors (baptism) or before individuals know what the ramifications of the agreement are (Endowment).  Indeed, the legalese of the Oath and Covenant of the Priesthood (D&C 20) is so encouched in non-related information that it’s hardly an oath and covenant, however Bruce R. McConkie clears it up for us:

Melchizedek Priesthood holders receive the priesthood by unspoken oath as well as by covenant.

Ah yes; an Unspoken Oath that most participants don’t even realize exists.  Sounds legit.  This talk begins with reminding the people they have made oaths with a fraudulent group willing to abuse the word “Covenant”.

And don’t we all enjoy hearing the Brethren tenderly express their love for them?

Followed by sweet moments of leadership praising their wives.

Today I wish to honor husbands, fathers, brothers, sons, and uncles who know who they are and who are doing their best to fulfill their God-given roles as described in the family proclamation, including righteously presiding and providing for and protecting their families.

This, is the woman, giving the talk about how women are glad that women don’t have authority, responsibility, or the ability to impact meaningful change in the organization.  The whole thing about covenant-making isn’t really about agreements, but about reminding members where their place is.  To do what they agreed to; shut up, and obey.

And the talk is to remind women that a woman’s place is not to preside, or lead.

The talk about covenants at the beginning might have been confusing until we get to this point, the talk is about what position each person is to be in.  To know their place, and not step out of place.  Truly, reading the talk in the voice of Professor Umbridge illustrates EXACTLY what the talk is about 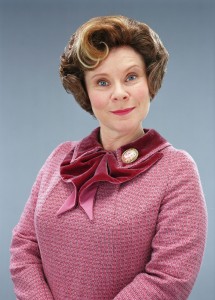 And then, after a very funeral-driven emotional story; we get to the thesis of the talk; that women need to be in their place.  Yes, this is the rebuttal to Kate Kelly being so uppity and rebellious as to suggest that a Woman’s place might not be exactly how it stands today.  Never mind that this year, after her excommunication and appeal was rejected, women were added to central committees of the church for the first time.  Ignore the history and details that show that women were given priesthood keys.

No, we should all be perfectly satisfied and never, ever, ever question the Men leaders; after all, we all covenanted didn’t we?  Even if those covenants would never hold up in court, and God, in His Divine Wisdom set up contracts that mankind can see as faulty, inappropriate and fraudulent, hey, you still signed the document… er, jumped in the water or bowed your head and said “yes”.

This entry was posted in 40 talks in 40 days for General Conference. Bookmark the permalink.
Last edited by Mithryn on September 1, 2015 at 8:22 pm